Curt Wvong began practicing karate in 1986 at the University of British Columbia, in Vancouver, British Columbia, Canada, with Canada Shotokan Karate (an international affilate of SKA). Curt led the Burnaby YMCA dojo in Burnaby, British Columbia from 1993-1996, and was a member of the Canada West team that won the Nisei Week team tournament in 1995. Curt moved to San Jose and subsequently joined the Saratoga Dojo at the Southwest YMCA in 2004. He was promoted by Ohshima Sensei to godan (5th degree black belt) in 2016.

In early 2010, the Northwest YMCA contacted SKA’s national headquarters asking if SKA would start a karate program there.

When he is not practicing karate, Curt works as a controller with a technology company in Silicon Valley. 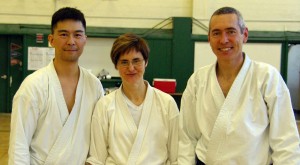 Paula Piemonte started practicing at the Saratoga dojo in 2002. Paula was promoted to shodan in 2009 and to nidan in 2013. Paula teaches art at a Silicon Valley area high school.